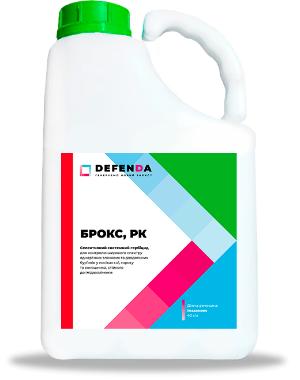 Selective contact systemic herbicide for control over a wide range of annual cereal and dicotyledonous weeds in areas of soybean, peas and sunflowers, resistant to Imidazolinones

The preparation has a wide spectrum of action against annual cereal and dicotyledonous weeds.

The preparation is effective against perennial weeds, including sow-thistle yellow and common couch grass (Agropyron repens).

The preparation has a double effect on weeds - through the root system and leaves.

Imazamox has a pronounced contact and systemic action, selective, is absorbed mainly by the leaves, as well as the root of the weeds, moves along the phloem and xylem, getting into the growth point, inhibits the synthesis of protein in the weeds, which leads to the chlorosis of young leaves, the removal of growth points, the pausing of development, the manifestation of dwarfism and, as a consequence, the death of plants.

Use of crops in crop rotation after Brox, RK has applied:

Brox, KR should be used in the initial stages of the development of weeds. It is not recommended to use the preparation when sunflowers, peas and soybeans are in a stressful state caused by environmental factors (low or, in contrast, high temperature, severe drought, excessive moisture, etc). The optimum temperature for application should be from +14°C up to +25°C.

The preparation is not recommended to use in tank mixes along with other herbicides (the preparation of high efficiency), insecticides of FOS group and mineral fertilizers

In separate cases, after the preparation has applied it is observed there is a decrease in height and/or change in the colour of plants, especially if sunflower plants are impacted by stresses of the environment (low temperature, severe drought, excessive moisture). As a rule, plants shall reach a normal appearance and high within 1-2 weeks.