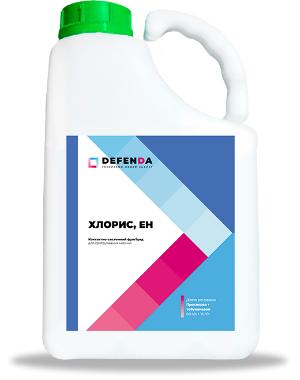 The contact-systemic fungicide designed for sterilization of seeds of frost-resistant winter wheat against a complex of diseases.

The preparation provides highly effective fungicidal protection of seeds with simultaneous disinfection of soil and seeds.

The preparation protects the primary root system of plants and contributes to the increase in the number of productive stems.

The CHLORIS, EN preparation contains the two active substances: prochloraze and tebuconazole, these two active substances complement each other, thereby increasing the efficiency of the sterilizing agent. Tebuconazole and prochloraze are in different chemical groups and characterized by different mechanisms of action on the pathogens.
Tebuconazole –destroys the superficial and internal infection, which is why it is highly effective against fungal diseases, fusariosis and helminthosporium root rot, septeriosis of sprouts. It has a well-defined systemic effect, penetrates the sprout, which provides reliable protection during the period from the seed germination to tillering phase.

Prochloraze – belongs to the group of imidazoles and has contact and trans-laminar effect penetrates into the seed membranes and destroys the surface infection, disinfecting the grain by realising it from the fungi contained on the surface of the seeds and in the aleuronic layer. It also disinfects the soil around the seed and root system of the sprout, which is very important for the production of healthy plants with maximum productivity. This active ingredient is highly effective against Fusarium, helminthosporium and other types of root and foot rots, mesh and dark brown leaf spot, is active against snow mould.

Due to its unique properties, the Chloris, EN preparation is effective against both seed and soil infections affecting all major types of cereals in the early stages of development.

Seeds are recommended to be sterilized 7 – 14 days prior to sowing.

The product is compatible with other preparations. However, in any case, before it will be used, it is recommended to test preliminary whether it is mixable or not.