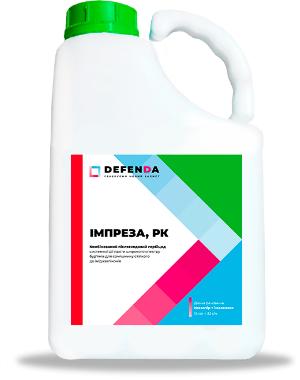 Highly effective preparation of a wide range of action against single- and dicotyledonous weeds in areas with sunflower crops (hybrids resistant to imidazolinones).

Reliable protection against weeds, including in problem areas.

The preparation is absorbed by a plant and spreading inside, by affecting the weeds growing processes, by ceasing them gradually and completely.

Preparations attributable to imidazolinones group cannot be used in one field more often than once every three years. After the preparation has applied, it should follow the next crop rotation:

Impreza should be only used on the sunflower varieties and hybrids of the Clearfield® manufacture system in the early stages of weeds development. It is not recommended to use the preparation when sunflower plants are in a stressful state caused by adverse environmental factors (low or, in contrary, high temperatures, severe drought, excessive humidity, etc.). It is not recommended to apply this herbicide at the temperature below +10°С - 12°С and above +25°C. The optimum temperature for application should be from +14°С up to +25°С.

200-400 L/ha. In the presence of a large number of the residual plants on the soil, the spray material consumption should be at least 250 L/ha. The most effective use will be when most of the weeds are at the initial phases of their development.

It is not recommended to use in the tank mix together with other herbicides (the high-efficient preparation), insecticides of the FOS-group and mineral fertilizers.

In separate cases, after the preparation has applied it is observed there is a decrease in height and/or change in the colour of plants, especially if sunflower plants are impacted by stresses of the environment (low temperature, severe drought, excessive moisture). As a rule, plants shall reach a normal appearance and high within 1-2 weeks.